We have no idea why we have waited so long to make a visit to Gremio de Brixton. It is underneath St Matthews Church – a place we know well as one of us went to playgroup there. But now the whole of the crypt has been turned into a restaurant and bar with tables outside overlooking the Peace Garden. But there was no room outside on such a warm evening so we headed into the dark cool depths to the cellar like rooms. It is a like a cut down version of the Mezquita in Cordoba. Lots of pillars obscuring the view of the other diners (although there were none when we visited). All the small tables were lit with a single candle but with overhead lights making it relatively easy to read the menu. The ceiling is low, the music loudish and we thought when full the noise would echo off the plain brick walls and pillars. But nonetheless we thought it was a fantastic venue.

This is a tapas bar and more. The menu – not extensive (a relief) – is cut into several sections. There were starters (para empezar), meat and cheese,  salads (ensaladas), paellas (you need to wait 25 minutes for these which is just about right) and then there are the tapas divided into traditional and Gremio. But what I really liked was that you didn’t need to ask what anything was — not a lot of Spanish except on the main headings and all the food was straightforward. So it was black rice with seafood and alioli — not a mention of “fragranced with saffron”, “steeped in …. or comes from the west bank of the high Mountains. We started with roasted broad beans – very salty and enough to eat with the first glass of wine as we waited for the food which arrived pretty swiftly. We then chose the black rice which was fantastic and I am not usually one to really go overboard on the compliments. Each grain of rice was lushly black with squid ink and soft but not so that it all stuck together. There were mysterious bits of seafood, prawns, squid and muscles) buried inside and creamy alioli on top and finished with a prawn. This was not just good to eat but a pretty picture too.

We also chose crispy Aubergine which was different from recipes in Spain. It was covered with polenta and deep-fried. We had been used to the Berenjenas in Andalucía which is served with miel de cana (a sort of sugar syrup). But we liked this version which came with a thick tomato sauce.

Then there was the Ox Cheek with smashed potatoes – again soft and easy to eat. Finally we had the prettiest dish – suckling pig with sweet potato crisps. This had dots of green (garlic) and red (I have no idea) around the sides and the square of meat was on top of a sweet apple sauce. 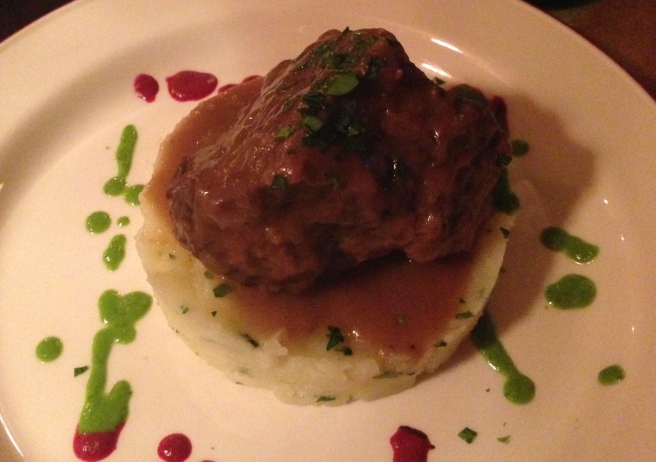 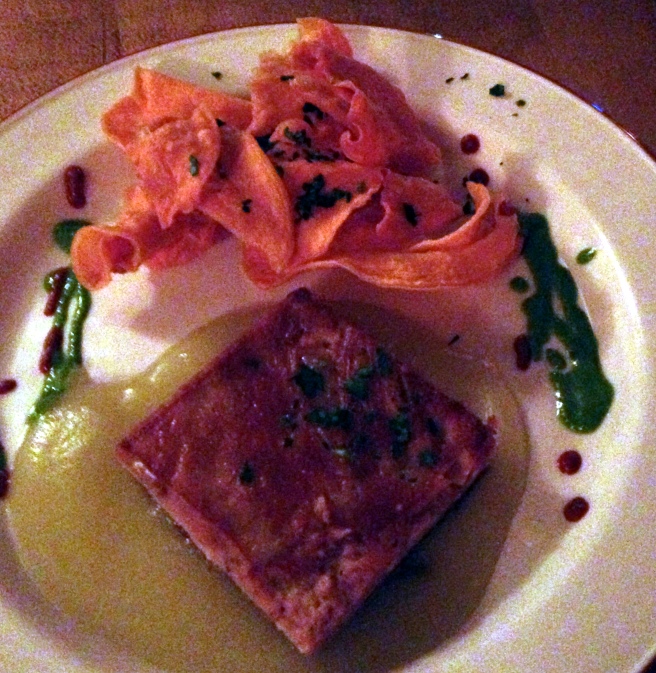 I cannot wax lyrical enough without pressing down the hyperbole button on the computer. All the tapa were delicious. We couldn’t have eaten more of the rich meat dishes and were full and content after only five dishes. They were washed down with a glass of Rioja and a special Alhambra beer.  The wine list is not extensive but covers all the bases and there is a special menu for summer drinks which of course include sangria. It all came to £37.10 and well worth it. Their website says they serve high quality Spanish products and they are right but they forgot to say that they also make it look attractive too. YOU MUST VISIT! We will be going again on a Sunday when they have unlimited tapas and a glass of wine or beer for £20.00 but you can only stay for 90 minutes.