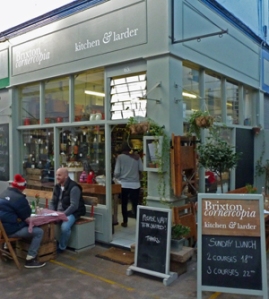 This was a small restaurant but it has grown and grown into the surrounding shops and now has more than 30 spaces. Also acting as a deli, Cornercopia uses locally sourced products not just including buying from the market but also foraged from local allotments. Even the honey comes from South London bees although we have no idea how they can be certain they haven’t made it across the river.

We chose to sit inside the main restaurant rather than the aisles of the market as the winter chill has obviously settled in at the market (bring a coat!). All the seating is meant to be shared but they do ask for permission before seating extra people. The walls were covered in pictures but unusually I didn’t take much notice as I was drawn to investigating the food and drink menus both proving to be interesting enough to keep us talking until the first course arrived.

As it was a Sunday lunchtime they were only serving two or three course meals from a blessedly short menu. Our two courses were  a starter and main course and all three of us chose the sweet potato and squash soup with hazelnuts and truffle oil. It was served in a blue and white enamel bowl as was the whole meal. The truffle oil on the soup was delicious but there were mixed comments about the hazelnuts. It also came with a piece of sourdough bread from Peckham. This whole course was really filling and I made the mistake of eating the bread which was very good but left little room for the immense main courses.

We chose pork, a shallot and Blackstick blue cheese tart and a fillet of grey mullet. The pork was succulent and came with a very large faggot and there was no remote chance of finishing it. The faggot was made of all things pork and was wrapped in caul fat (don’t ask just believe it is delicious). It was the size of a tennis ball. The mullet was served on a bed of capers, saffron and smoky vinegar and was perfectly cooked and although the contrast of hot and cold was surprising, it too was designated a success. The tart had immense roasted shallots on top of a cheesy base of flaky pastry.  But in addition to the large portions there was also a big bowl of roast vegetables. This was a meal for three in itself. There were roast carrots (black, white and orange), kale, huge roast parsnips as well as roast potatoes. This course was a definite hit and as we had no space to put the vegetables we asked for boxes to take the food away for heating up for the next day. They were delivered to the table by the chef who said he was so glad he didn’t have to throw anything away.

Ultra-local food also includes ultra-local beers from Kernel’s micro-brewery in Bermondsey and we chose pale ale which although as bitter as pale ale also smelled and tasted fruity. Wine is English which we can’t vouch for and, very surprisingly, they offer an organic gin and tonic. The gin is also local and is distilled in Clapham. You can now see why we spent so long reading and not looking at our surroundings.

The meal was a little on the pricey side for the market – £18.00 per person for two course and three course for £21.00 without drinks –  but it was certainly well worth it for the quality of the food. Next time I might try the main course and dessert. because I am never going to be able to work my way through the gargantuan three courses, particularly when the desserts are sticky date pudding and spotted dick. Even after turning off the hyperbole key on my computer I can say that this is the best restaurant in the market and….it is certainly value for money.

ps  There is a deli attached to the restaurant which has a selection of chutneys and jams made by local people with the furthest being from Croydon. But it also sells more exotic fare.