Open for delivery orders: Thursday to Saturday – Noon to 9:00 pm.

Today we tried a home delivery of their ready meals. This follows the delivery of a box of fresh fruit and vegetables (see review here) that we agreed was a great success. They offer Indian inspired food that includes gluten free and vegan options and and is all veggie. And we agree with the claim that this is definitely “plant powered goodness” with “Indian fusion, international confusion”. END_OF_DOCUMENT_TOKEN_TO_BE_REPLACED

This is an outfit that mainly offers home delivery for their menu of hot food, but also, almost as a sideline, will deliver a box of fresh fruit and vegetables. They are open for hot food Thursday, Friday and Saturday. They describe themselves as offering “plant powered goodness” with “Indian fusion, international confusion” that emphasises fresh fruit and vegetables. The restaurant menu has many gluten free and vegan options, which we plan on trying soon when our larder runs out. END_OF_DOCUMENT_TOKEN_TO_BE_REPLACED 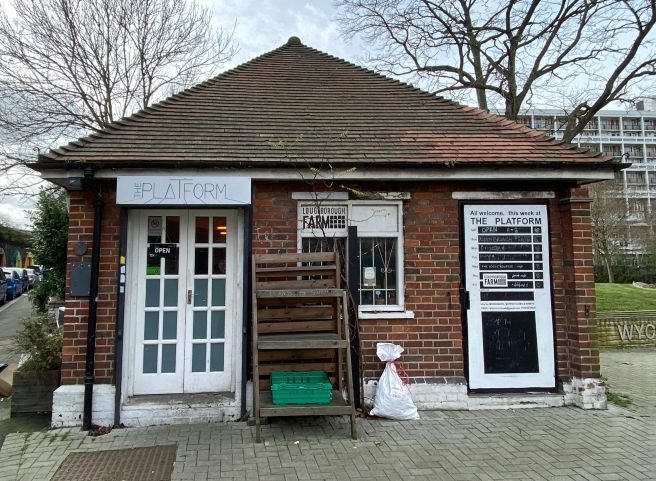 The Brixton Pound Cafe has given itself a new name and, following the loss of the premises in Atlantic Road, has moved to Loughborough Junction. But it still offers lunch and supper made from surplus food on a pay-what-you-can basis. It describes itself as a new social eating place serving vegetarian & vegan meals using surplus food saved from landfill. END_OF_DOCUMENT_TOKEN_TO_BE_REPLACED 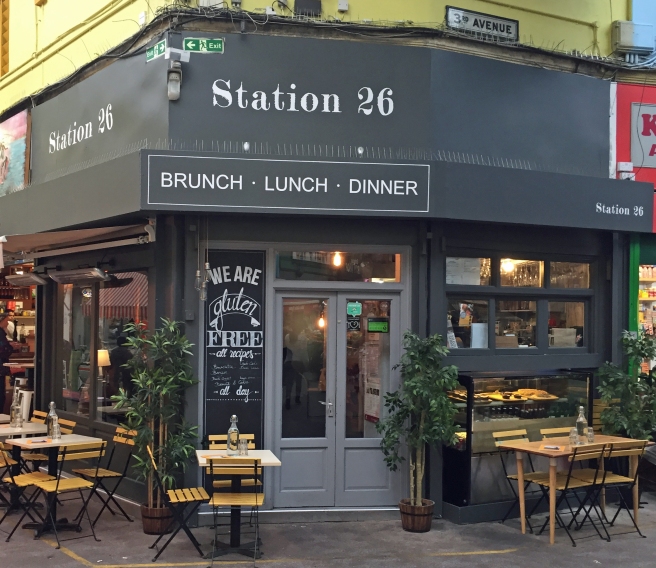 Restaurants come and go but this gluten free cosy restaurant seems here to stay. Not a lot has changed since our last review (link) in June 2018. Everything is gluten free, even the beer, with vegan and veggie options too. Our daughter who should be gluten free, but finds it tough, said, “…it was such a relief not to have to closely read each dish’s ingredients”. It is on a corner plot, and when we say it is cosy we really mean it. It has closely packed tables inside and even then they give you a blanket. It is a good idea to book. END_OF_DOCUMENT_TOKEN_TO_BE_REPLACED

As reported before, Brixton Station Road is now a food court with a range of different outlets and have slowly been working our way through them. Coming back from the gym (first time in four years) we stopped to pick up lunch. There are many different foods on offer, but when you have decided on the stall, the choice is generally limited. Although we had given up on Vegan eating at the end of January, this place caught our eye. END_OF_DOCUMENT_TOKEN_TO_BE_REPLACED 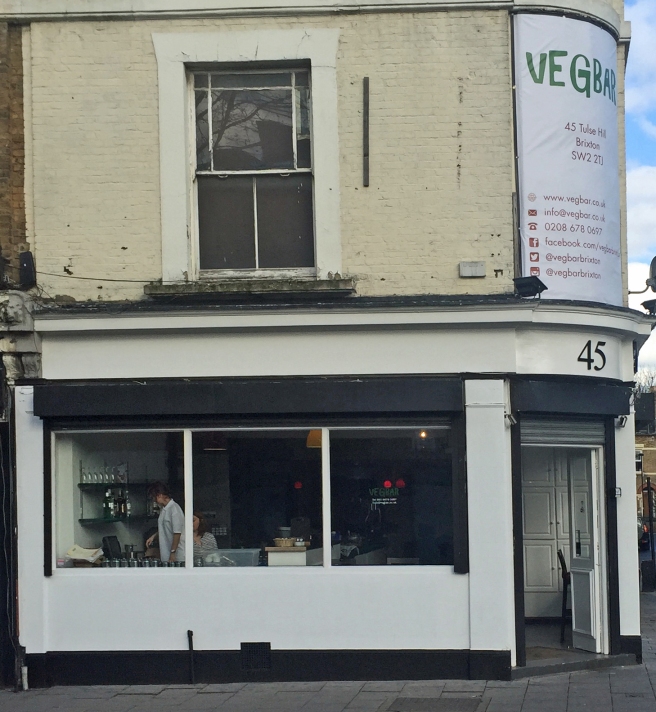 So who knew that Vegan January was a thing. For those hoping to cleanse their system after a hearty meat eating festive season, a January of vegetarian food might be a good idea. But it seems rather unfair to dump vegan food on the unsuspecting, so we have gone out of our way to investigate potential restaurants. Vegbar serves only Vegan food, so the choice was easy. We reviewed this restaurant before so look for our positive review here. It is out of the way on the road to Tulse Hill but if you know where Brixton Social is ,then just keep on walking. The unprepossessing exterior is not at all inviting and the decor is also aiming for minimal going on Spartan. Gone are the small but inviting dashes of colour. Wrap up warm if you are going early as the temperature inside early in the evening is definitely cool even though we sat next to the radiator. END_OF_DOCUMENT_TOKEN_TO_BE_REPLACED 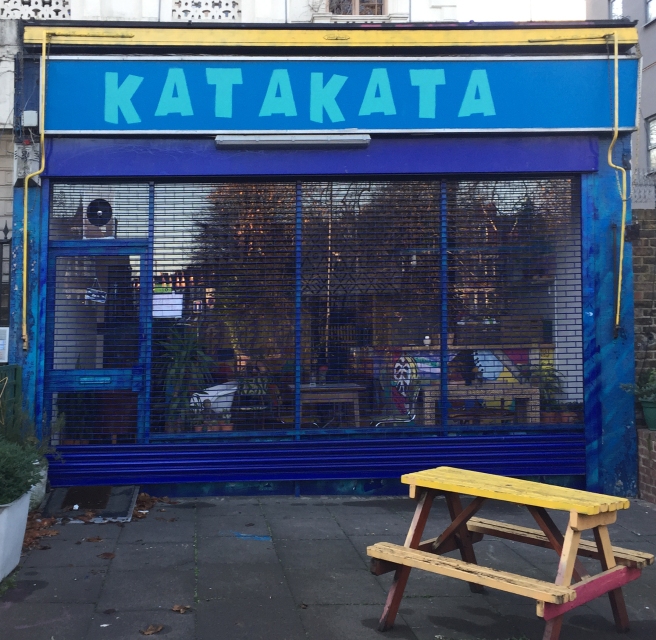 Opening times – 10am to 10pm everyday

You may have overeaten during the Christmas break and/or are now suffering from a lack of cash so we thought that we would help with a few recommendations that will not break the bank. This one resulted from a lack of planning after seeing the early Saturday showing of Fantastic Beasts in Streatham. We headed back to Brixton with one thing on our mind – food. Our original destination, Negril, was full to bursting but next door there is this restaurant/cafe. At any other time we might have ignored it – now very glad we didn’t. This cafe serves coffee and pancakes (savoury galettes and sweet crepes) and was totally empty when we visited. We assume this is fare for lunch or a late afternoon snack but now we know it hits the spot for dinner too.

There are a few tables and chairs on two levels and it is all very Zen. In the back there is a library of worthy philosophy and self help books and in addition to the welcome fan heater there is a perfumed mist pumped into the air. Galettes can be cooked in front of your eyes but we preferred the locality of the fan heater.

The food is all worthily vegetarian or vegan. Their galette is a buckwheat pancake and we think cheese is essential so opted for vegetarian options. We chose a Farmer which has free range egg, cheese and spinach and a Red Goat (spinach, beetroot, goat cheese and sweet potato. Both came with an interesting salad (carrot, bean shoots, beetroot and more spinach). Flavours were subtle but interesting and both were slightly sweet with dressing and herbs. They were also huge and definitely hit that empty spot leaving us no room for more. As they cool the galette does become a little tough so we gave up with the knife and fork, got rid of some crusty bits and picked them up.

We washed them down with jasmine tea and an apple and ginger juice.

This is definitely comfort food and we will not be rushing back just yet although great to know it is likely to have an empty seat on a cold, damp night. It is also relatively cheap with the total bill being only £16.20 and it could be cheaper if we had chosen differently.

After returning from meat eating Colorado, where it was impossible to find even a tomato that wasn’t a garnish, it was a pleasure to go to a restaurant with nothing but vegetables. Vegbar has taken over the premises of the Portuguese restaurant Brazas on Tulse Hill. This corner is seeing an upswing in the types of cuisine offered with two new restaurants opening here in the last couple of weeks. It now offers Caribbean, Indian (Khan’s of Brixton), takeaway pizza and two new wine bar/restaurants as well as this Veggie-Vegan restaurant.

Vegbar has updated the interior by painting the inside all white and covering up the rather austere wood panelled walls. The light-heartedness stretches to tiny colour changing LEDs and multi-coloured light shades. The tables and comfortable chairs remain as does the open grill area. Vegbar opened its doors on March 26th and they were still finding their feet with an empty salt cellar and the soux chef occasionally forgetting a vital ingredient on the plate. But we enjoyed it. We hope it does well as it is not in Brixton Village but up the hill nearly opposite the large Sainsbury’s.

They offer small plates, which are all vegetarian and marked with vegan and/or gluten free as an occasional dish does contain cheese. All the descriptions make the plate inviting and we ordered four. The first a Junkyard Dog (a vegan hot dog topped with pickled chilli and fennel salad) was tasty because of the accompaniments. We thought it wasn’t fennel salad but some sort of cabbage or beetroot but we didn’t ask so we can’t be sure. Next we had an Arepa’s Delight which was cornbread topped with a scramble of tofu and black beans. We only noticed that the accompanying guacamole had not been added when we had eaten half but they were happy to bring us a bowl. Both were really interesting and the cornbread had just enough chili to warm the mouth but allow you to taste the more subtle flavours on the plate. The guacamole had little tomato (a plus for some) and lots of coriander. It needed a little more salt and that is when we discovered the empty pot. 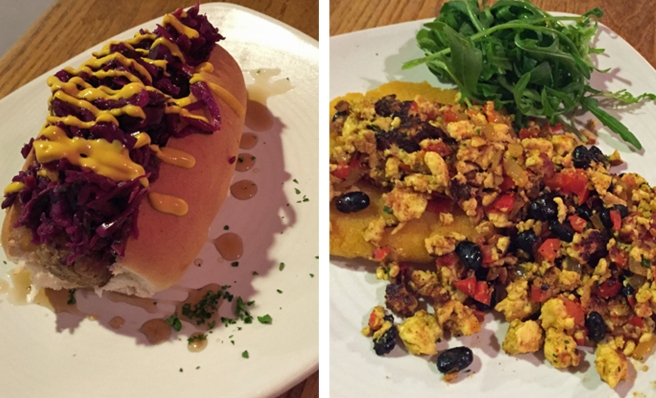 Next was Kumara Kings (sweet potato and spinach jerk bites with pineapple salsa). We were not so keen on these, as they were a bit dry and there was not enough of the pineapple salsa to go with them. The pineapple salsa was delicious – sweet and pickled and a little warm we could have eaten much more.

The star of the show was the last dish – Don’t know Jack? – spicy jackfruit and mushroom tacos with almond and plantain sauce (on the menu) but we thought it included tomato. There were three on the plate and we could have eaten them for the whole dinner. Who knew that jackfruit could taste so good. 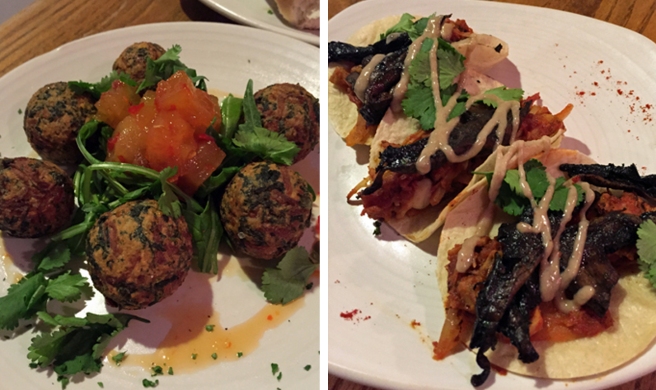 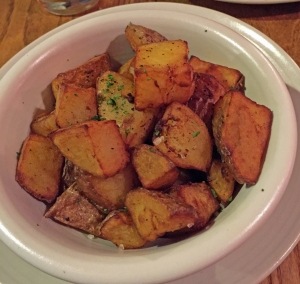 We also ordered a side of sea salt and black pepper fries which were great after we added more salt and pepper.

They also have desserts but we were full. They did look interesting and again were vegan (pies and brownies with ice cream and alcohol). We will certainly try them next time.

We washed all this down with a couple of halves of Heineken. They did have wine but we didn’t see a drinks menu. The meal cost about £29.00 for two people including the drinks. A good value meal and we will certainly be visiting again with more people so we can try more of the small dishes.

We all love Brixton Wholefoods. It’s a touchstone for long-term Brixtonites and, while we might not shop there all that often, we are glad it’s still there like a 1970’s time capsule. Which is a bit surprising as it didn’t open until 1982. It even stayed the same when moving across Atlantic Road from what was the site of the first David Greig’s grocery store and where the Lounge can now be found – hence the “Transatlantic” on the shop front.

END_OF_DOCUMENT_TOKEN_TO_BE_REPLACED

Address: corner of Brixton Station Road and Pope‘s Road – along from the Recreation centre

If you had ever wondered what happens to people who appear on Masterchef then wonder no more….. they graduate to the now well established food destination of Brixton! Ollie (one of the brothers in the last series) and Hayden are serving food as part of the new food corner on Station Road. There are about 9 or 10 street vendors that add to the jerk chicken and falafel stalls which are an everyday occurrence outside the Brixton Recreation Centre. We are trying to review them all so will hopefully manage to get round them all by the end of the summer.