Enish is very new Nigerian restaurant in Coldharbour Lane, taking the place of The Majestic (see here), which was our introduction to this national cuisine. This incarnation is part of a group of restaurants peppered around the capital. The Majestic was a little down at heel, but it is now all dolled up – shiny tables, comfy chairs and wooden floors in place of the dubious red carpet. This bar and restaurant with knowledgeable clientele (I’ll come back to that later) eating and drinking from their complex menu. Cocktails are sweet and served in jars, beers are from Nigeria and the menu has a glossary to help the naive – like us. Despite having read about Nigeria recently, we needed the guiding hand of the waitress to make our choices. END_OF_DOCUMENT_TOKEN_TO_BE_REPLACED

There was also two pieces of fish in really nice and crispy batter, which we easily polished off.

We should have learnt our lesson by now that chips, unless really, really crispy when they leave the restaurant, will be just soggy by the time they reached us. These were not as bad as some, but they steam in the packaging and while these were tasty, they came out as a little limp.

The whole meal was around £20.00, not including the tip. But this was a bargain, given the amount of food and the leftovers providing a second meal with a proper Ceasar. We will be back again, but our list of potential takeaway and deliveries gets longer, so perhaps not for a little while. 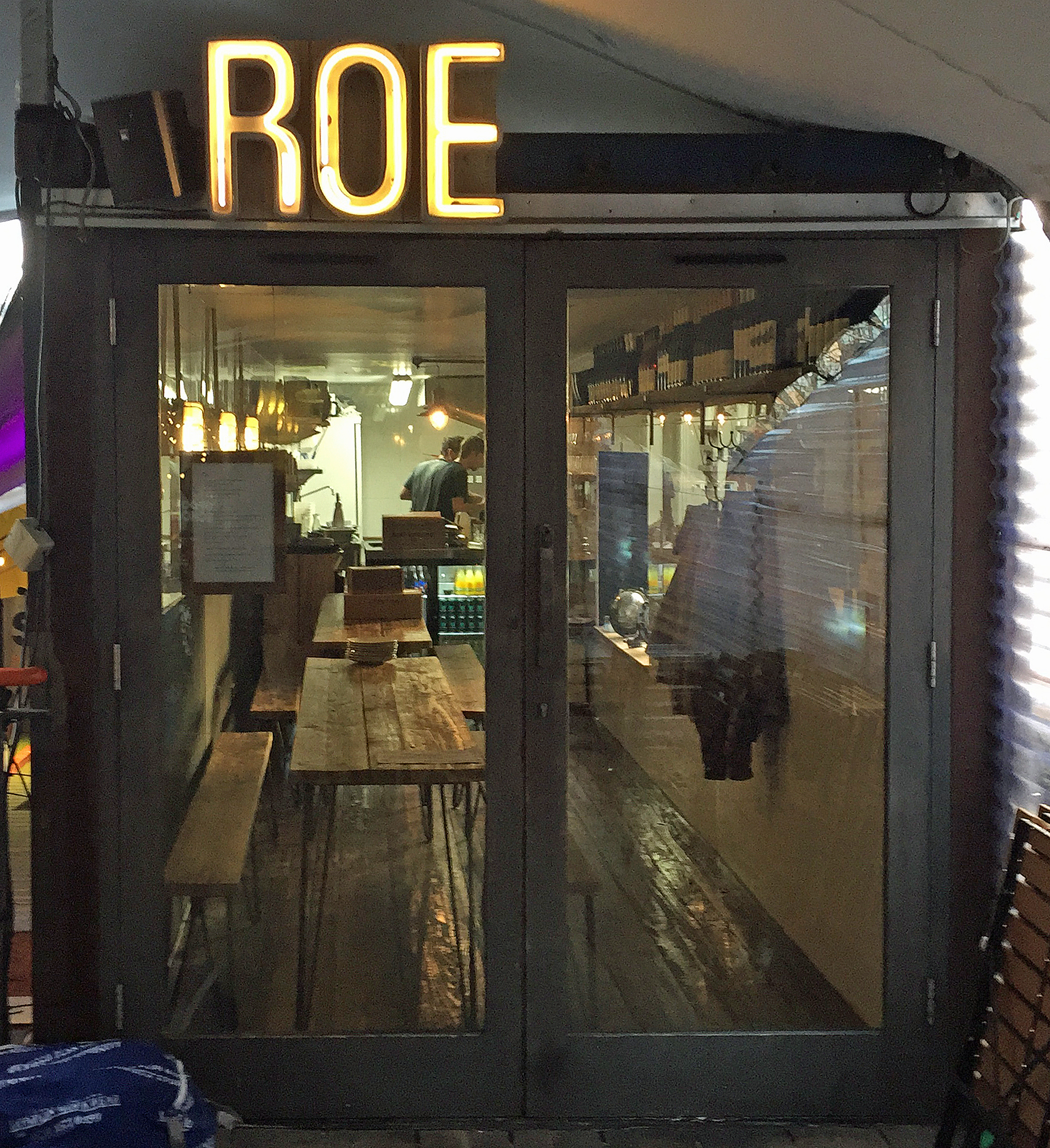 This Pop Brixton venue has changed hands several times but has been fish restaurant the last two times. The painting of the fish on the ceiling is probably  some encouragement to stick to this theme. Eight place sittings on long tables mean that there is room for the waiting staff and it doesn’t feel crowded. Sit away from the door for a view of the open kitchen.

This is fish, fish and more fish. You can choose a la carte or just have the six dish tasting menu for £25. We were on a strict time limit, so we chose two dishes from the a la carte to share between us and a dessert each. The menu has 4 parts – starter sized dishes, small plates, mains and then desserts. END_OF_DOCUMENT_TOKEN_TO_BE_REPLACED

We never know where to buy fish and chips, so we called a consensus meeting to rate four fish and chips shops around Brixton. Six people, with more than a hundred and fifty years of experience of fish and chip suppers, sat down to rate cod, chips and mushy peas each on a five point scale from the following outlets: 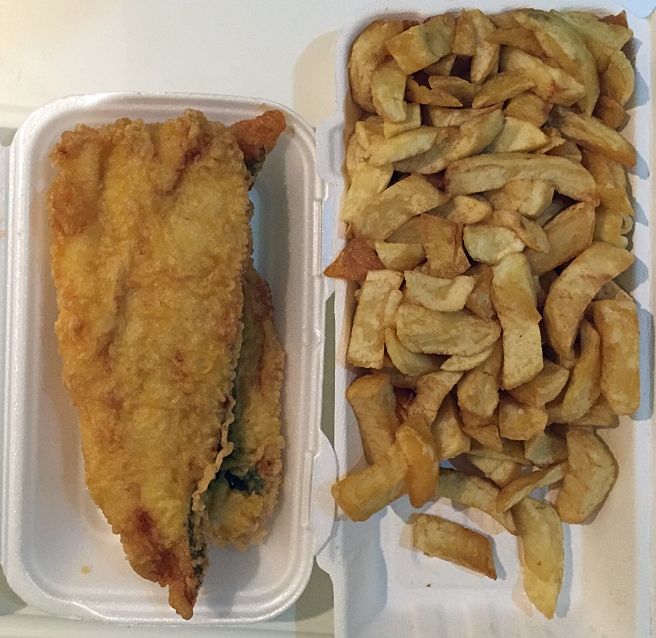 END_OF_DOCUMENT_TOKEN_TO_BE_REPLACED

15-17 Market Row, Brixton, London SW9 8LB
Telephone:
– Express Cafe 020 7978 8515
– Lobstar Pop-up 079 5843 8441
Opening times:
Express Cafe:
Monday – Saturday 7am–5pm (Wednesday early closing 3pm)
Sunday – Closed
Lobstar pop-up – only until the end of November:
Thursday – Saturday 7pm-11.30pm
Website:
Lobstar – http://topofthepopups.co.uk/lobstar/
Lobstar is a short run pop-up at the premises of the Express Cafe in Market Row. The Express Cafe is a greasy spoon, one of the few left in Brixton, that only opens during the day. So it occasionally rents itself out to pop-ups in the evening. We’ve been a couple of times, for vegan food – see here and for hotdogs – see here , and now, for three days a week in November, there’s a limited menu of lobsters and seafood.

END_OF_DOCUMENT_TOKEN_TO_BE_REPLACED

It’s still in the same double unit in Sixth Avenue in Brixton Village and still painted outside in pastel blue. So what has changed inside. Gone is the kitsch mural of the seaside and now it is all black and white – although the chairs are still multi-coloured. We have the very small napkins but now they are presented in a little black paper sleeve, together with a knife and fork. The menu has also changed with items that imply more finesse and we were assured that it also changes regularly.

Service has not changed. It is cheery, helpful and as laid back as before.

The menu is still focussed on fish but now includes a wider variety of starters including ackee soup (ackee is the Jamaican national fruit although it is eaten as a vegetable in ackee and saltfish) and the menu describes this soup as coming with salt fish flakes, sweet peppers and crispy croutons. Then there is crispy calamari, garlic peppered prawns and marinated tuna. The ackee soup can be ordered without saltfish for the sole veggie option.  There are four salad options and then the mains have spaghetti, risotto, fish soup and confit cod. The veggie option is sweet potato and pumpkin curry. We did miss the superb battered fish in Etta’s tasty batter.

They now serve alcohol – red, white and fizzy wine by the glass or bottle – as well as a few rum based drinks.

We chose the ackee soup, the confit cod and the fish curry. We are sorry to report that we were disappointed with every dish. The soup is an interesting idea but it tasted as if the saltfish had not been adequately soaked and so was too salty. The rice and peas that came with the fish curry was also over-salted and the potato and leek cream under the confit cod was bland and cold. We guess there were lots of interesting flavours in all the dishes we chose but they were simply swamped. We came out desperate for more water, even though we had drunk a whole carafe plus a glass of lemonade. and the salty taste in our mouths lasted for several hours.

We have to admit to being cowards. The staff are so attentive but we couldn’t tell them our verdict, except to mention rather feebly that the soup was a bit salty. Clearly the chef’s taste buds are not like our own but you can add salt to taste but you can’t take it out. We hope that this was an unfortunate one-off and that others will have more luck, but I am afraid we are unlikely to visit again any time soon.

The bill was modest at less than£30.00 (sorry, we’ve lost the bill) for three dishes and a glass of lemonade (it is dry January!).

I suspect our readers have made New Year Resolutions about increased physical activity, weight reduction and are perhaps even partaking in Dry January. But there is no chance of fulfilling any resolutions if you go to Chip Shop this month.

This new restaurant opened in the first week of November and is already pulling in the punters. It was opened by the people who own The Brixton Village Grill in Brixton Village. They sell…. wait for it … fish and chips but this is not the usual takeaway (although you can take it away if you want to). It labels itself as a hip hop chip shop and we can vouch for the steady stream of music which definitely does not stay in the background. Small and perfectly formed tables of two, three or four allow for reasonable conversation.

The menu has the usual cod and haddock but then it also has sea bass, monkfish, lobster and specials like swordfish. We chose a starter between the two of us – scallops with chorizo on a bed of samphire, which was easily enough for two.The scallops were cooked as they should be and the samphire wasn’t  woody but still had a good crunch.

To follow we had a special – swordfish – and the fishcake. Most of the mains, although not the fishcake,  come with two of the following: rice, chips and salad. We watched the monkfish and chorizo for other diners come by on skewers hung upside down and a really large lobster but our meal proved to be more than a match for the “show”.

The swordfish, which is a meaty fish anyway, was also enough for two, especially with the salad and chips plus some beans we had ordered as a side.

The salmon and haddock fishcake was of the same size and it doesn’t come with chips, although it really needs an accompaniment to make it interesting. Perhaps it would be better as a lunch dish and, anyway, it now seems to have disappeared from the menu..

We fitted in a shared dessert of pannetone bread and butter pudding. This was not up to the standard of the other parts of the meal as it was a hefty slab – no lightness that you would have expected from the pannetone. Clearly it was chilled and then heated and perhaps they need to consider another option. If you ate this for lunch you would be asleep all afternoon. The cheesecake or the sticky toffee pudding might have been better choices.

We washed it all down with tap water and a Sangres beer. The total bill for two was £42.65, before adding a tip and we thought this was value for money. We had really good food, the service was attentive and we came out really full. We ate at 8.00pm but by 9.00pm it was very full, so choose your time carefully. We will be back, with the £20 whole grilled lobster a likely target.

A decent fish and chip take away is something that has been lacking in Brixton for a while. Don’t’ want to mention Olly’s in Herne Hill (oops) but it’s been our favourite for years. Only problem is it’s a bit of a trek away if you fancy a fish supper on a whim. Introducing Brixton’s Rock. With a branch already in Brockley this one is situated half way up Acre Lane, opposite Lidl. So last Friday, with Nan and Grandad paying us a visit, we decided it was time for a family take away. To be honest there isn’t much point describing the inside. It’s like any other fish and chip shop, although much more welcoming and attractive than some of the other take away joints on Acre Lane. It’s very silver and shiny.

END_OF_DOCUMENT_TOKEN_TO_BE_REPLACED

For some time I’ve promised myself that I will write about shopping for fish in Brixton. Because one of the most fantastic things about central Brixton is the number of fishmongers. Across the country fishmongers have become an endangered species, largely replaced by supermarkets. But here in Brixton we have more fishmongers than there are in the whole of Hertfordshire. By this I mean proper fishmongers, where they offer a good range of types of fish with knowledgeable staff who will clean and fillet your purchases. This is great, of course, but it does pose a problem when you have to choose which shop to use. So, unlike earlier posts in our series about shopping, I’m not going to focus on a single shop.

I’ve actually lost count of the number of shops in Brixton that sell fish but not all of them, in my mind at least, count as proper fishmongers. Quite a few of the Afro-Caribbean grocers sell some fish and there are others that specialise in fish but just sell it frozen, straight out of the boxes in which it arrived. I rarely use these, apart from the fish section in the Wing Tai Supermarket in Electric Avenue which is often useful, particularly for prawns.