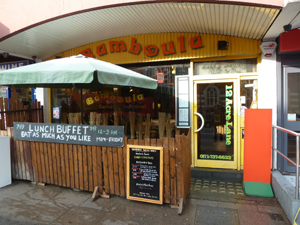 You would have thought that Brixton was full of Caribbean restaurants but it isn’t and they only really began appearing as real restaurants rather than jerk chicken take-aways about ten years ago and only relatively recently have they been well used and not on a knife-edge of bankruptcy. Bamboula is someone’s Caribbean dream with its green and yellow bamboo and grass hut decor. Unfortunately it was raining and not the warm shower but the relentless stuff that wets all the way through. However, the restaurant made up for that by being cheerful and with welcoming staff. It was a Friday evening and reasonably full – not difficult as it is small with about 8 tables and a bar. The clientel were couples and groups of young women with  high proportion of people from the Caribean which gave us the confidence that this was the real thing. The menu was short enough to be interesting but not overwhelming and it has an unusual list of soft and mixed, mostly rum based, drinks that the Friday nighters were quaffing.

There is the usual Caribean fare of jerk chicken and ackee and saltfish. We chose goat curry and chicken but there are vegetarian options too. The curry was tasty and was accompanied by callaloo rice (like spinach) but the chicken was a bit dry. The portions were large, so large we could only manage a main course. Not particularly expensive – about £12 for a main course and a soft drink (soursop juice). So if you are intending to go to the Ritzy stop in for a quick and filling meal. If you are around for lunch they offer an all you can eat  – I don’t know if that would not be much of a bargain as only a little goes a long way!

This is a quick addition to the review – we do not want to change any of our views on the food in this restaurant but on our last visit we saw a change in the service so thought it should be noted. We visited just before Christmas with a group of six people early in the evening before going to the theatre for the festive outing. We wanted something quick before hopping on the tube. The food was fine and we got to try more chicken and lamb options but the service was definitely not with a smile. Given the time of year we would have hoped for some facial expression and all we got was surly which was enough to put you off your meal. Restaurants are a service industry and they rely on   return custom. Good service doesn’t overcome bad food but if there are two restaurants which are equally good then service may make all the difference. We want you to thrive so please make sure that this improves.