In the flurry of openings in Brixton this summer lands the next location for The Rum Kitchen, this time on Coldharbour lane. With sites already in Notting Hill and Carnaby Street, it describes itself as a “Caribbean eatery that bends the rules”. Now when it comes to Caribbean restaurants coming to Brixton there has been some controversy. Turtle Bay was marred with condemnation of its cultural appropriation when it opened last year, with its “RASTAFYME” photo booth and criticism over the restaurant chains unfair tipping service, so there would always be caution in another chain opening. However, it seems there was no need.

The Rum Kitchen invited us down for their press night, a few days prior to its grand opening this week. Light and airy this is a massive space adorned with wood, coloured barrels and a clear tropical vibe. With a couple of tables out the front and a bar as you walk in, this is clearly made for a hangout spot, not a quick bite to eat. The outside area is tiny and next to the busy road so we’re unsure how popular it will be. Obviously cocktails are a big thing here, so the bar has stools so you can grab a drink and a snack. 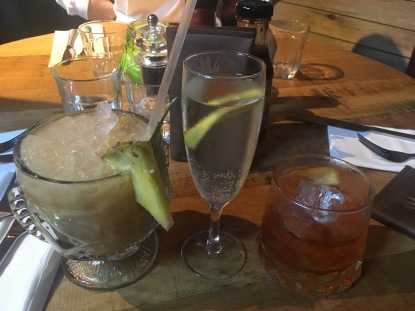 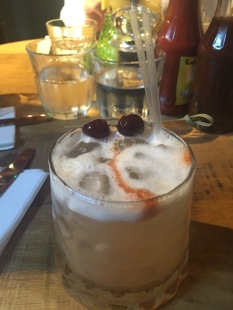 Drinks were first on the agenda, and the cocktail list is huge. Rum ones are the main feature, with experimental and different versions of classics (Negroni becomes a Tiki Negroni and a Bloody Mary becomes a Jerk Mary). We went for: a Shiny Cocktail, a Tiki Negroni, a boring choice of an Old Fashioned and a Plaintain Colada, mainly because we heard it was the biggest cocktail you could get for one person. We highly recommend the negroni and colada. The Shiny Cocktail had way too much citric acid, making drinking it a bit of a schlep. After downing these we moved on to Old Cubans which we mainly stuck with for the rest of the evening. Looking forward to being more adventurous next time we visit! Cocktails seemed to be in the region of £7-10, whist beer is around a fiver and wine £5-7 for a glass. Not exactly cheap! 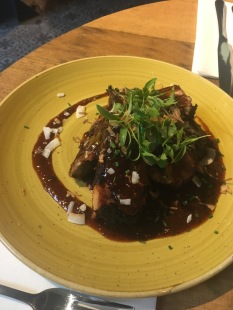 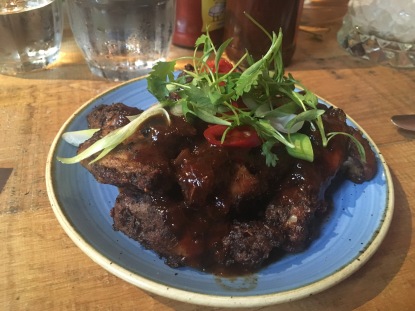 For food we were given a selection of starters and mains. Kicking off with jerk wings with jerk bbq sauce & crispy onion (£7), island spiced baby squid with scotch bonnet mayo (£7) and 18 hour slow cooked pork belly ribs with trk (the rum kitchen) bbq sauce & crispy coconut flakes (£8.50). The wings are not too dulled down on spiciness, which can sometimes be found in Caribbean chains, and the meant on the ribs fell off the bone while covering your face in the delicious smoky barbeque sauce. I’m a big fan of squid but it wasn’t anything I hadn’t had before. Big tip! These starters are made for sharing so don’t be selfish. 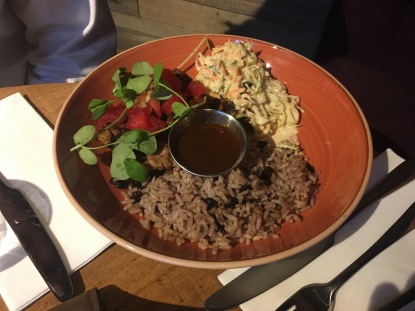 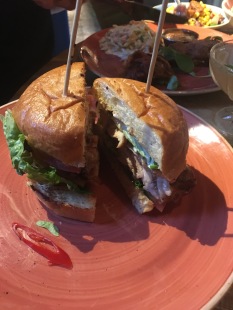 Moving on to mains – between the four of us we had, the TRK burger (jerk chicken thigh topped w/ jerk bbq sauce and scotch bonnet mayo £9.50), the 3-piece bowl (3 pieces of jerk boneless chicken thighs w/ jerk gravy and rice £8.50) and the Jerk Fried Chicken buttermilk (brined jerk fried chicken topped w/ jerk gravy £9.50). The fried chicken won the race by a mile. The spicy juicy meat was perfection along with the crispy skin, and coleslaw on the side made the perfect accompaniment when the heat became too much. The burger was huge and perhaps there were too many fillings, but again I wouldn’t say no. The three piece bowl was what you’d find in any Caribbean restaurant, and if it wasn’t hot enough for you, the famous Rum Kitchen sauces were a great addition. 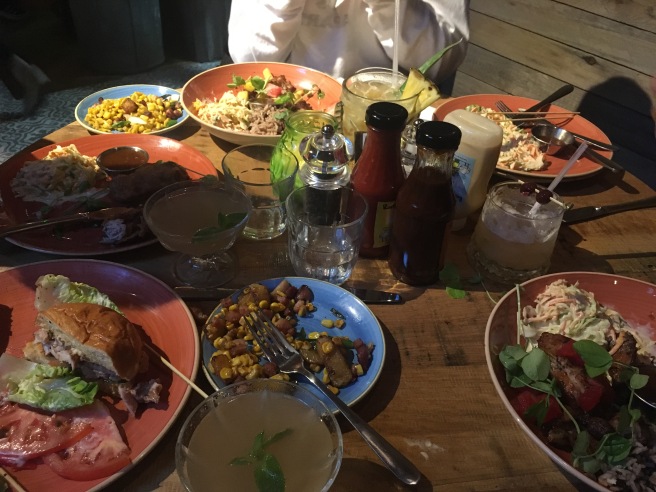 The flavour for the chicken is achieved by marinating for 18 hours and then slow cooked for 6 hours. They then smoke the meat in their bertha over real wood smoked in pimento to improve the flavour and tenderness (yes I stole that from their website). Clearly why each piece was cooked perfectly.

The service came with a massive smile and we loved our waiter who was friendly and made us feel comfortable. The DJ’s set was also on point, might even go just for that next time.

I really enjoyed our evening, from the food to the company and the cocktails to the soundtrack and the service. Not sure it’s the cheapest in the world, but maybe stick to just open cocktail if funds are an issue. We are definitely planning another visit soon.