You remember Kricket in Pop Brixton – see our review here. We liked it’s original take on tapas type Indian meals for sharing, coming from a variety of places around the Indian subcontinent. We were sad to see it go to a more permanent setting in Soho, but it has now returned to its roots. There’s a new venue, in Atlantic Road in the two arches vacated by Brindisa. Design is minimal. Stretched corrugated metal over the arched ceiling and wooden tables and chairs for two, four or a crowd. It opened only a couple of weeks ago, so is enjoying a honeymoon period where booking is a must. They fitted us in as walk-ups at 6.20, but we only had the table for an hour.
Menus are similar to when it was in Pop Brixton. There are snacks such as cornflake chevda, which is really like cornflakes with some extras to make it hot, sweet and spicy – we liked it. The other snack we chose was the crispy pig, large pork scratchings. They come with a shrimp and peanut chutney, which does really balance the textures. They need strong teeth although ours could have been crunchier.

We then over-ordered with four plates – Bhel Puri (crispy bit, raw mango, tamarind, yoghurt), which we thought was a bit wet and sickly. Unfortunate, as we had this as a favourite when we have visited before. Samphire pakora (samphire surrounded by batter and deep fried). This was a second try for us, as the last lot we had was very woody, but definitely not this time. It comes with a mayonnaise, which we also thought a mistake, but that maybe because we ate it with the damp Bhel Puri. 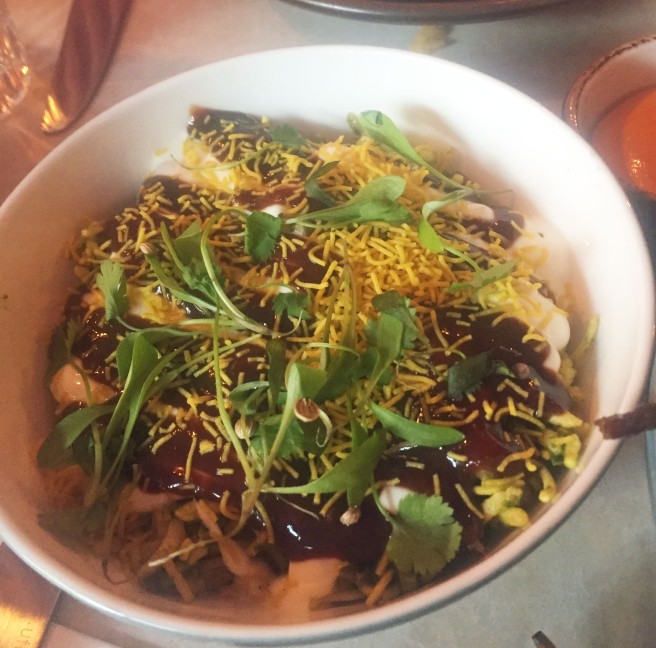 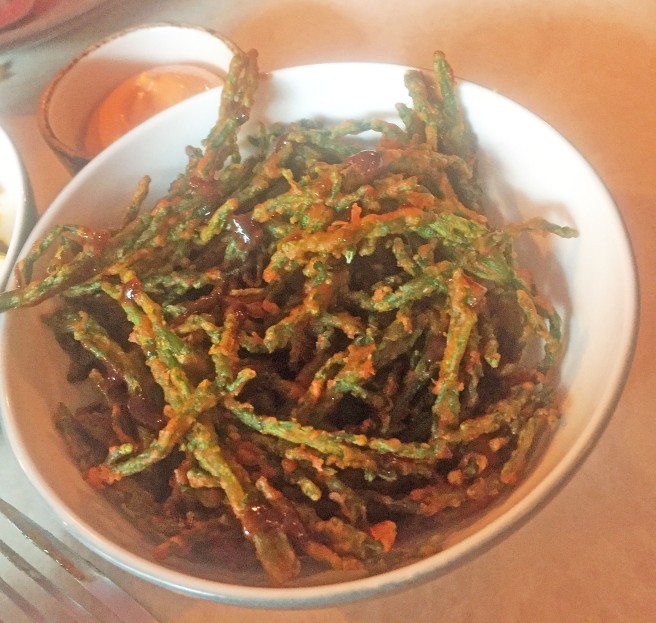 These dishes were followed by Pig’s Head Vindaloo, with an artichoke tarka and pickled onions and Kerala fried chicken. The Vindaloo won hands down as our favourite dish of the meal. It was hot and spicy but not overwhelming. Vindaloo is a Goan specialty with Portugese roots and its about garlic and wine or vinegar, not about heat. We lost the garlic but the pickled onions were a real treat and had a sort of Rose flavour to them. I am afraid we thought the Keralan Chicken (sorry no photo) a bit of a let down. More like popcorn chicken and not as tasty as the ones from Kentucky. 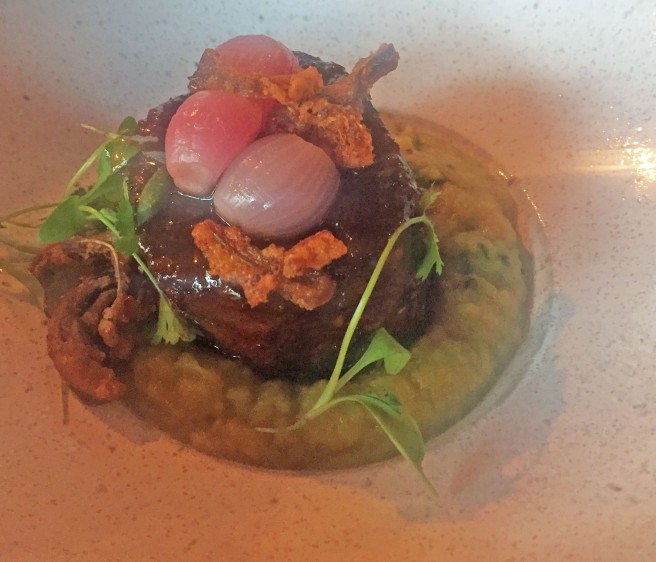 It is noisy, so friends will need to cuddle up. The hard edges and soft curve of the interior mean that sound bounces around, add to that a few trains overhead and the music and it can get very loud.

We washed all down with three halves of beer, two of IPA and a Lemongrass beer which was light and refreshing and went well with the heat. The bill came to £53.54 for two people including service, which the waiter pointed out when we asked about a potential tip. We will go back, but this time we will book and go with friends, so we can work our way through the whole menu.