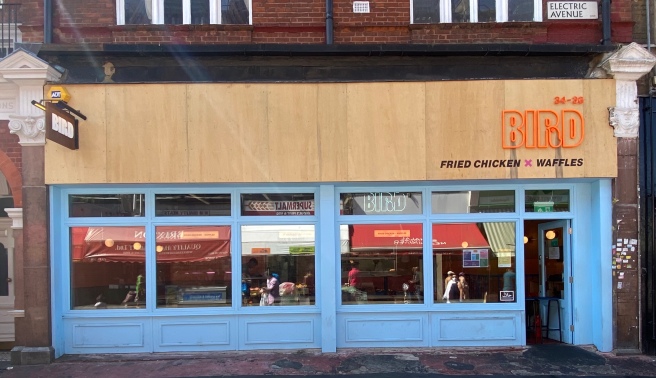 Bird describes itself as London’s original fried chicken and waffle joint – a description to the point when you look at the menu (although some might dispute the “original”). You have to like fried chicken, which comes as burgers, alone, with sauce (sticky soy, buffalo, Korean, blue cheese, BBQ, honey ginger) and in a waffle. There are a few veggie options with two also vegan.

The problem with takeaways is ordering when you are hungry – eyes always bigger than your stomach. We ordered a large skillet with sticky soy, small fries and poutine (more later). Chicken comes in batter and you can choose various pieces of the anatomy – breast, thigh, drumstick or wings. The large skillet is two thighs, two drums and two wings. The publicity surrounding the brand suggests that they use free-range chicken, although this doesn’t appear to be on their website. 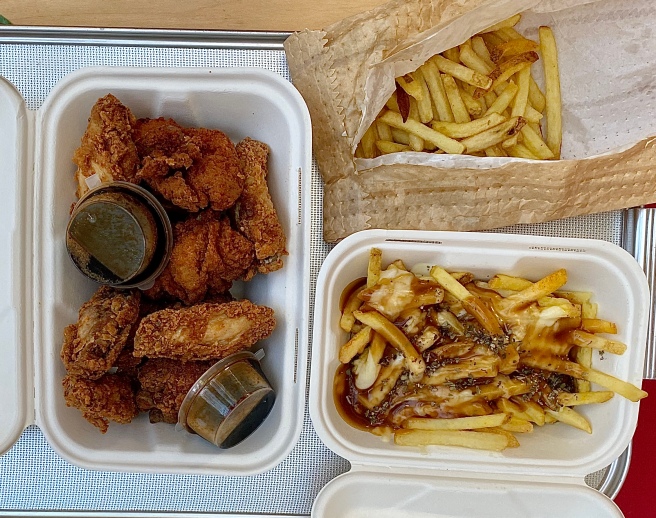 The fried chicken was definitely a cut above and the batter was still crispy, even though packed in a paper box. But, without the sauce the batter was a bit tasteless – not even enough salt. The sauce was very salty, so beware. Some of the other sauces glaze the chicken, so probably will make the batter soggy if it has to travel far. 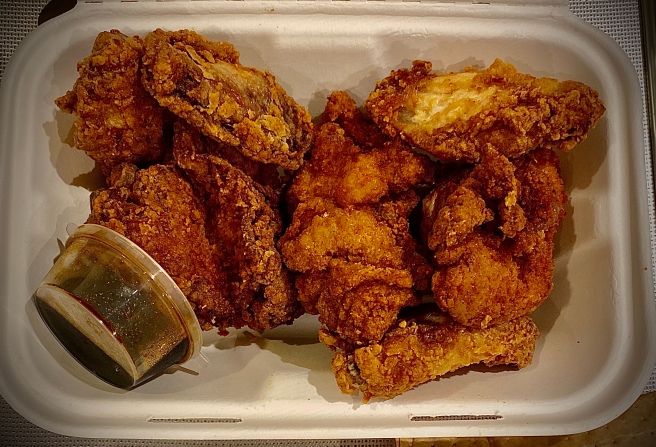 Now to the poutine – it was called Proper Canadian Poutine and we will not be choosing it again. It is fries with chicken fat gravy, melted cheddar cheese curds (?). We liked the salty gravy but travelling doesn’t help this dish. It makes the fries very soggy and the cheese was only melted for a very short time until it became solid as a rock.

We felt that the fries were under-cooked by a couple of minutes at least and we would have liked them a golden colour and crispy. A few were like that but most were pale and flabby. This was not affected by the travel as Deliveroo was fantastically fast.

This was a relatively cheap meal – £22.55 from the Deliveroo menu. Interestingly the menu on the Bird site makes the meal £2.05 cheaper, which is difficult to understand as the food is exactly the same.

One thought on “Bird – the takeaway”