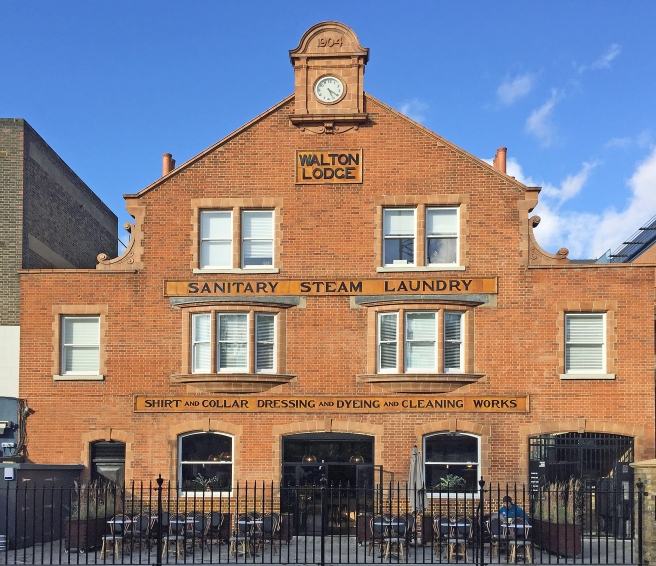 Newly opened at the Walton Lodge Steam Laundry, this eating establishment clearly needs to exist on turnover. With the rain tippling down on their outside tables, when we visted, this is going to be a bit of a task. But this is a bar as well as an eatery and, as we ate very early one evening, it was filled with many young women having cocktails. The place itself is smaller than you would expect from outside and oddly proportioned, with a down staircase taking up a lot of space in the middle.We were hungry and the menu was interesting, so we probably chose too many small plates. So we had polenta accompanied by some sourdough bread with caramelised onion butter; and then three veg and one fish dish between us. We would also have ordered an oyster or two, but they were off the menu. In the end this was probably lucky, as we certainly didn’t need them and they were somewhat pricey.

We did like the bread and butter, but, even though I am not overly keen on lots of spice, I thought they had forgotten the promised chili in the polenta. It did have a great crispy coating though. 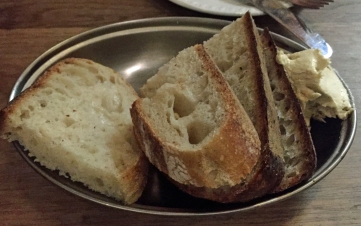 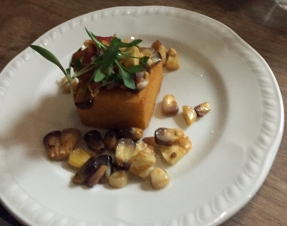 We both loved the hispi cabbage with Stilton, topped with buttermilk and green apple dressing, but would have loved it even more if the cabbage hadn’t been luke warm and the dressing positively glacial. A little more trouble with balancing the temperature would be a really good idea. Apologies that the photo shows it half-eaten.

Then came the roasted cauliflower, ricotta whey and grains, which was good but needed a bit more cooking of the stem. 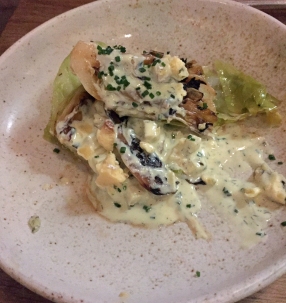 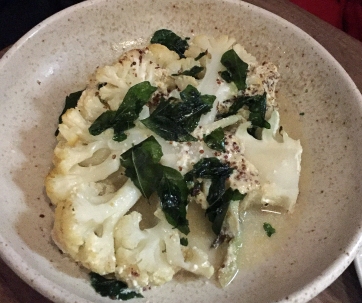 Then came the monkfish with mussels – no complaints here not even really small ones. It was all cooked really well and was a delight. 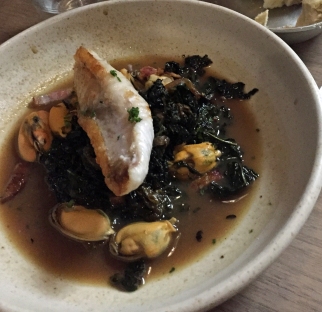 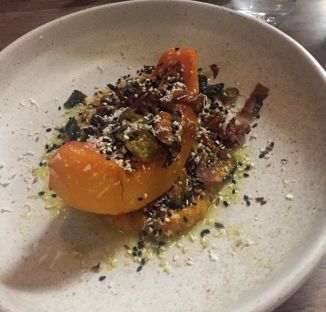 The last dish to appear was described as “all the pumpkin” which it was – a piece of pumpkin with coriander seeds, herbs and fresh horseradish. But if it is all the pumpkin where are the the pumkin seeds and why did it take so long to prepare and appear?

The tap water was charged £1.00 for what was said to be a voluntary contribution that eventually makes it way to Water Aid. We think it really pays for their filters – if it is voluntary, why was it not in a place where we could say no, as we already give to Water Aid. We also had two local beers. The bill came to £68.63 (including 12.5% service). There are more meat and fish options on the menu and I am sure they will be working on their teething problems, so we will probably be back.